Fourth Place
“Variations on a Magician’s Fate” by Ben S.
Comics based on The Magician
He drew some extensions of the “Magician” comic that turned out pretty great, especially the Mayan getting his mind blown and the terror nightmare rabbit. 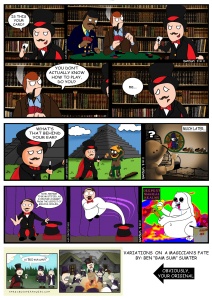 Third Place
“Broken Arm” by Jenny S.
Video based on this comic.
She and her friends made a shot-for-shot remake of “Broken Arm,” and considering the degree of faithfulness we’re going assume that the lead actor actually broke his arm for the part.

Second Place
“Skip’s Tribulation” by Chad J.
Short story based on the “The Movies” series.
A short story inspired by the “Movies” set of comics, and it was such a morbid interpretation of Skip’s psyche that we thought we should at least try to cheer Chad up by giving him a book.

First Place
“Conscience” by Jörg P. and Fabian S.
Song Inspired by this comic.
They wrote and composed a song inspired by the comic “conscience.” It’s one of the first times ASP has been translated to music, and it came out pretty dark and occasionally off-key. Perfect!

Great work, everyone, we really appreciate the time everyone took in entering! You are all the coolest.